While the rest of the world got used to the Australian shenanigans with politics  with kevin rudd in the news earlier as primer minister  and then not  too soon , removed from seat , theatrics has happened once again  with  Now julia gillard current prime minister now removed from seat  and kevin rudd reclaiming his prime ministership that he won when labor won back the elections from liberals after many years

Chris Hayes, the Chief Whip, announced at 7.45pm that Mr Rudd had defeated Ms Gillard by 57 votes to 45. Mr Rudd is likely to go to an August election if he is restored to the prime ministership tonight after a 7pm showdown with Julia Gillard. 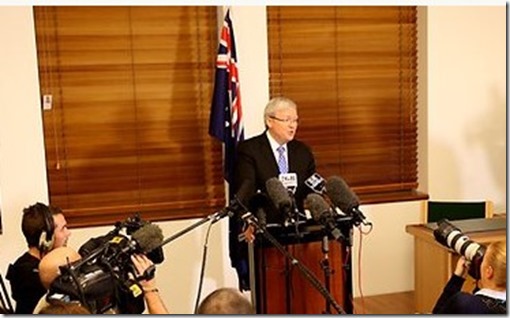 so who's is the current prime minister in australia ?

As of today (27/06/2013) its kevin rudd who was sworn in today , after Julia gillard lost a ballot last night  that was held within the labor party

Sources have confirmed that Mr Rudd would abandon the September 14 election date, and seek to go earlier – with an official election campaign likely to begin within weeks.